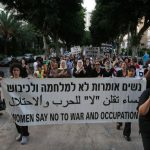 This week we are happy to feature a couple of audios we did NOT record ourselves.

Resisting Militarism and Occupation in Israel

First, German comrades attending the Balkan Anarchist Bookfair last year interviewed two Israeli anarchists about resistance against the settler-colonial nation they live under. Dana is from Tel Aviv (a member of the Coalition of Women for Peace) and Aaron is from, among other groups, an anti-militarist, de-enlistment group called New Profile. Info about the Coalition of Women for Peace can ben found at CoalitionOfWomen.org and you can learn more about New Profile at NewProfile.org/english/ . My voice will show up in the main segment instead of one of the interviewers who preferred not to have their voice aired here. This is followed by a brief statement by one of the interviewers who conducted the interview about their views on the reasons it was difficult to publish the critique of Israel from within Germany.

The Last Act Of The Circus Animals

After this, we’ll hear Sean Swain talk about the book he co-wrote with Travis Washington, The Last Act of the Circus Animals with his friend, Adam Bomb. Last Act is available for free in 3 parts in zine format at seanswain.org, alongside Sean’s many other writings. You can also purchase a book version of Last Act from Sprout Distro. We won’t be airing the whole interview with Sean in the radio version of this, we simply don’t have the time. But if you want to hear the last 10 minutes or so of it, check out our podcast version available for free at thefinalstrawradio.noblogs.org, up on our youtube channel, spotify, etc etc. Keep an ear out in the next month for a conversation with Anthony Rayson and Mike of South Chicago ABC, the group that among many other things, first published The Last Act of the Circus Animals.

TFSR is a member of the A-Radio Network. Check our show notes for a link to the latest edition of our monthly podcast, BAD News: Angry Voices from Around The World, featuring anarchist perspectives from Greece, Germany, France and Chile.

From Monday, December 23rd onward, there will be a phone zap for supporters of anarchist prisoner Michael Kimble to call and press his captors in the Alabama Department of Corrections to demand a transfer for Michael from Holman Correctional. Michael was recently placed in segregation for coming to the defense of a fellow prisoner being beaten by a guard. He is urgently asking for support in attaining that transfer to a new facility so as to not face retaliation in the shadows from guards for his solidarity. Supporters suggest calling the following officials:

To learn more about Michael and read some of his writings, check out AnarchyLive.noblogs.org or issues of FireAnt. You can hear our interviews with Michael on TFSR.

After various attempts to break with the endogamy of our collectives, of trying and failing to move beyond merely interpreting the works of the classical anarchists, we have decided to launch this call. Our objective is to meet others and exchange experiences, skills, ideas and dreams; to return anarchism to the streets and incorporate it into everyday life.

Now, more than ever, we want to see this society go up in flames. We need to get together, to advance from the lessons we have learned, to listen to each other without arrogance or submission. In this vein, this call for a week of “Anarchist Days” seeks to turn our focus and energy to the practices and resistances of everyday life; the spaces where subversive ideas and practices germinate.

We hope that wherever this call reaches, there will be a response because the fury and fire know no borders. We also want to be clear that homophobes, sexists, machos, racists, fascists, government affiliates, etc. are not welcome.