June 11th is the international day of solidarity with Marius Mason and all long-term anarchist prisoners. This year we want to explore the connections between long-term prisoner support and anti-repression efforts around recent uprisings, a sharp reminder to us that the difference between a status of imprisoned or not is often tenuous and temporary. With thousands of arrests for protesting, rioting, and property destruction from last summer's George Floyd uprising, we must be preparing for the possibility that more of our friends and other rebels may end up in prison. We're also seeking to find ways to facilitate interactions between our long-term prisoners and uprisings in the streets.

We were happy to share the production of this episode with the lovely folks at June11.Org. To this end, we speak with:

They share with us their experiences with state repression, what motivates them, and some thoughts on what we can be doing to make us, our communities, and our liberatory movements more resilient. The speakers responded to questions in the same order throughout the conversation but didn’t identify themselves much, so remember that the order and the projects they’re involved in can be found in our show notes.

You can learn more about Marius Mason and how to support him at SupportMariusMason.org. You can see past podcasts by June 11th, prisoner statements, artwork, info about the prisoners supported by the effort, a mix-tape they curated last year and events listed for various cities you can join at June11.org. We’re releasing this audio before June 11th to entice folks to consider a potluck, an action, a letter writing event, a banner drop, a postering rampage or something to share the day with folks behind walls. Hear our past June 11 episodes here.

You can also hear the June 11th statement for this year alongside other info on prisoner support from comrades at A-Radio Vienna in the May 2021 BadNews podcast!

If you’re in Asheville, join Blue Ridge Anarchist Black Cross today, June 6th for a letter writing from 5-7pm at West Asheville Park on Vermont Ave. BRABC meets every first Sunday at that time, provides info on prisoners with upcoming birthdays or facing repression, stationary, postage and company. Never written a letter? Don’t know how to start? Swing by and share some space!

Sean Swain is fighting to be paroled after 30 years in prison and 316 podcast segments. You can find more about how to support his efforts here: https://www.anarchistfederation.net/sean-swain-is-up-for-parole/

Comrade David Easley, A306400 at the Toledo Correctional Institution, who has in previous months been viciously assaulted by prison staff at the direction of the ToCI Warden Harold May, as well as number of other inmates also who have been isolated for torture and other oppressive, covert, and overt retaliatory actions at that facility, denied adequate medical care for speaking out against the cruel, inhumane treatment at that Ohio facility. More and more comrades are reporting occurring throughout the ODRC, and across this country for any who dare stand up and speak up for themselves, and the voiceless within the steel and concrete walls.

This is a CALL TO ACTION to zap the phone at the U.S. District Court in Toledo, Ohio and demand that Comrade David Easley be granted a phone conference with Judge James R. Knepp II, and the Attorney General because Comrade Easley's lawyer of record has decided to go rogue by not filing a Memorandum Contra Motion as his client requested and now the State has presented a Motion to Dismiss his case to that court.

Also, reach out to Comrade Easley using the contact info he like many of our would appreciate the concerns, and love from us on the outside to stay the course, and not get discouraged in his Daily Struggle.

the following was received from comrades at 1431 AM in Thessaloniki, Greece, a fellow member of the A-Radio Network. We had hoped to feature an interview they would facilitate with Giannis Dimitrakis for June 11th, however you'll see why this hasn't been possible. We hope he heals up quickly and would love to air that interview for the Week of Solidarity with Anarchist Prisoners in August:

On 24/5, our comrade, a political prisoner, the anarchist Giannis Dimitrakis was transported to the hospital of Lamia, seriously injured after the murderous attack he suffered in Domokou prison. G. Dimitrakis barely survived the the attack, and the blows he received caused multiple hematomas in the head, affecting basic functions of his brain. A necessary condition for the full recovery of the partner is the complete and continuous monitoring of him in a specialized rehabilitation center by specialist doctors and therapists.

In this crucial condition, the murderous bastards of the New Democracy government, M. Chrysochoidis, Sofia Nikolaou and their subordinates decide on Thursday June 3rd to transfer Giannis back to Domokos prison and even to a solitary confinement cell, supposedly for his health. Transferring our comrade there, with his brain functions in immediate danger, is for us a second attempt to kill him. Domokos prison does not meet in the slightest the conditions for the treatment and recovery of a prisoner in such a serious condition.

Αs a solidarity movement in general, we are again determined not to leave our comrade's armor in their blood-stained hands. Nothing should be left unanswered, none of the people in charge of the ever-intensifying death policy that they unleash should be left out of our sights.
Immediate transfer of our partner to a specialized rehabilitation center
Hands down from political prisoners
Solidarity and strength to the anarchist fighter G. Dimitrakis

This is an invitation to engage June 11 in solidarity with Giannis Dimitrakis. On June 9th there will be a solidarity demo in Exarchia, Athens at 7pm! 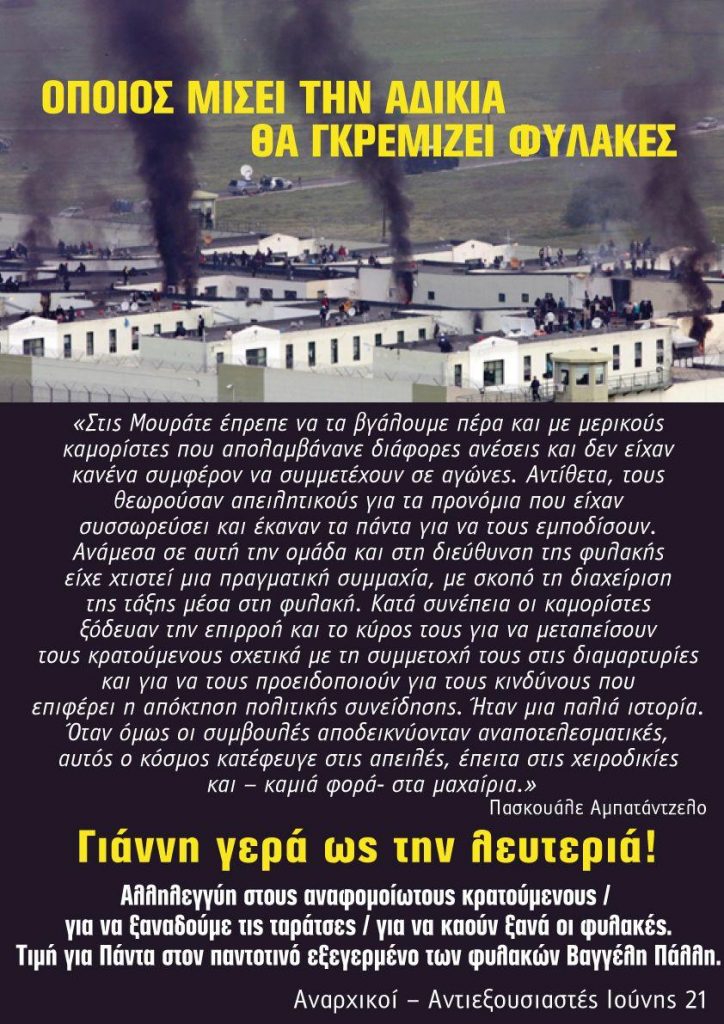