This week, we’re excited to share the voices of Jess and Olive, who both did legal support, and do prisoner solidarity with the folks facing Federal prison time from the struggle at Standing Rock against the Dakota Access Pipeline. This episode was heavily edited for radio, so I suggest you find our audio at our website or in itunes or soundcloud or youtube or ideally our podcast stream and listen to the podcast version, cuz it is crammed full of great information and perspectives we don’t have time to include in the radio version of the show this week.

Jess did legal work supporting the struggle in Standing Rock against the Dakota Access Pipeline in 2016 and into 2018 and continues to support political prisoners in the case. Olive lived in camp, engaging in nonviolent direct action and working security during the winter (late november-february), survivor of water crises in West Virginia and as a Sundancer. Olive stayed through the raid on Oceti near the end of February 2017 and became a paralegal afterward and doing legal support for their loved one, Rattler.

At the end of these notes I've included a few post-scripts from Olive about the folks who caught sentences, Akicita and prophecies of the "Black Snake".

We speak about L'eau Est La Vie camp in so-called Louisiana is continuing the struggle against the southern endpoint of the Dakota Access Pipeline from Enbridge.  Visit the site to learn more and how you can get involved, they need help!

Support sites for the Federal Prisoners from Standing Rock

NYE Demo in AVL & Beyond!

The day after this airs is New Years Eve and cities around the U.S. and abroad will be continuing the, I believe Greek anarchist, tradition of noise demonstrations outside of jails and prisons. Check out itsgoingdown.org for a list of places holding these where you can join in and be heard behind bars. In Asheville, folks’ll be meeting up on College St in front of the court house and jail at 7pm and will bring noise makers, warm clothes, banners and signs. 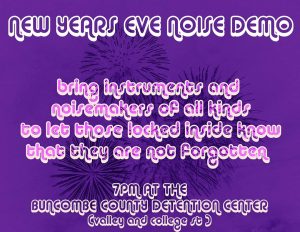 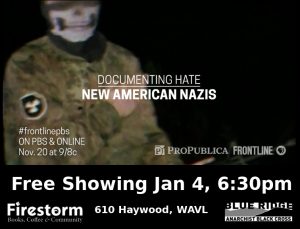 Finally, The Final Straw Radio alongside It’sGoingDown, crimethInc and Mutual Aid Disaster Relief are calling for a week of action around the weekend of January 20, 2019. With the charges from January 20, 2017 dropped, we can focus on other forms of long-term solidarity and mutual aid, creating a fertile soil for future resistance and creativity. You can find the challenge and ways to plug in at cwc.im/survival

As an aside, I want to share a little more information from Olive about Akicita:

“...Traditionally, Akicita would go to battle as a last resort and were always the last to leave, but they acted as protectors and to hold people accountable and dispense consequences when necessry, one example being on Buffalo hunts; people were not allowed to take more than they needed or to hunt by themselves because it hurt not only other tribal members but the Buffalo population. Akicita made sure the hunts happened with integrity. They also kept Nacas, elders, and the people informed. They were mediators of conflict. They were recognized for acts of bravery and selflessness. “

Also, Olive had these notes to share about the Federal Defendants who’ve been sentenced:

“Little Feather’s mother is part of the Morongo Band of Mission Indians in California, so I forgot to mention he is also Morongo in addition to also Lakota and Chumash.

Rattler is a descendant of the war chief Red Cloud, who also signed the Ft. Laramie Treaty of 1868, one of the treaties we were defending with our occupation through camp.

Olive also had this to add about their own participation at Standing Rock:

“If it's relevant, I didn't mention another responsiblity I had while being in camp. I formed with two other femme people Two Spirit and Women's security branches so gender queer folks like myself and women/femme people could deal with our own safety/decolonizing issues within camp. This is how I began to work with Akicita security directly.

The role of Akicita, the several councils that made up camp for collective decision making, and the ceremonies we participated in were all ways we were actively decolonizing our daily lives and DEFYING state intervention in disputes among our community (concepts of transformative justice try to exert the same concept of "don't call cops, be accountable" but don't necessarily have the structures to do it like traditional indigenous societies have) “

“I didn't feel we had the time, but I wanted to at least tell you about some Lakota prophecies related to the "black snake" and historical context of where camp was located. All of this information I have is from Standing Rock elders and Lakota that know their lands well, including Tim Mentz, a Lakota archaeologist from Standing Rock, as well as my own experience from living in camp.

Grandfathers, some in the early 1800s, had visions of a "black ribbon on top of the Earth to separate all people...the people wouldn't gather anymore...when the black ribbon goes underneath the Earth there will be no more Lakota." This "ribbon" is seen as pavement and fossil fuels. Prairie Nights Casino was built on top of a known site where ceremonial fasts were held. Cannonball River has buttes, all with names known to the Lakota one being Tipi Butte near the Backwater Bridge. Near Backwater Bridge (where cops kept up barricades after North Camp raid), there are remnants of old Sundance ceremony arbors. October 22nd arrests happened partly because we were protesting the 27 burials that were uprooted for DAPL's access roads that were across from HW 1806. Cannonball Ranch, which was eventually bought by DAPL, had Bear effigies, burials in the four cardinal directions, with at least 82 other sacred sites and ancestral sites of the Lakota. Southwest of where Oceti camp is Horshoe Bend, along the Standing Rock border is Treaty ground where men gathered to discuss the 1851 Treaty (North Camp was actually 1851 Treaty Camp). Spotted Tail (Sicangu band) and Big Head adopted one another around the year 1851 in the same location of Oceti camp. “